The long road to Throne of skulls is on and the project is set at building a 1500pt Tau list in time for it from scratch.  I have a 3000pt Tau force already but it was the first army I ever collected and painted (for 40k at least) and It's been a dream to go back to repaint or redo the force to a new, higher standard with the techniques I've learnt.  At the moment I'm looking into colour schemes and  few spring to mind but nothing final.  The only theme I'm sure of is fitting the army into an urban enviornment so with that said and painting stalled untill I've chosen a scheme I thought back to one of the best mantras I ever heard (GW manager of Solihul), bases and faces.  These two features really make a model, giving it a context and a focal point for detail.  Faces will come in painting but first I need to construct the bases. 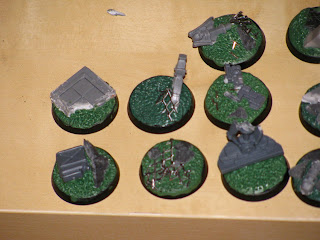 An urban base is different from a more open or natural feature in how busy it is.  With little vegetation or plants there will be far more 'hard' features requiring painting and on display.  These hard features can be taken from a number of places, spare weapons and grenades or knives from sprus but even off cuts to form rubble.  I used off cuts from the Imperial Sector box of building components and small pieces of slate to fill in the gaps.  Height is another feature, building the base upwards adds to the feel of tumbling debris and cramped environs of an urban theatre. To tie these features together green stuff is spread over the base and the pieces pressed in.  Texture is fairly straightforward with repeated jabs from a modeling tool.  There are no hard and fast rules but simply play around, I've chosen to make these bases before the models and intend to scult and position the model to whats around them. 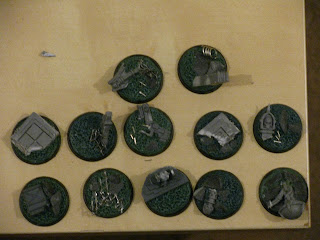